Through the Lens of Time

About this collection
Through the Lens of Time: Images of African Americans, from the Cook Collection, is a digital collection of over 250 images of African Americans dating from the nineteenth and early twentieth century, selected from the George and Huestis Cook Photograph Collection at the Valentine Richmond History Center. The digitally scanned images on this site are of prints from glass plate negatives or film negatives taken by George S. Cook (1819-1902) and Huestes P. Cook (1868-1951), primarily in the Richmond and Central Virginia area. The Cook Collection consists of over 10,000 negatives taken from the 1860s to the 1930s in Virginia and the Carolinas.

These photographs of African American life in turn-of-the-century Central Virginia are valuable both as conveyers of unique historical information and as examples of the nascent art of photography. Their preservation by the Valentine Richmond History Center and their digitization by VCU allows everyone from historical researchers to school children to access and learn from this fine and rare resource. Items in this collection were digitized in 2000.

Through the Lens of Time is a joint project between VCU Libraries and the Valentine Richmond History Center.

During a search for 19th century illustrations for a book, Williamsburg authors Alfred Kocher and Lawrence Dearstyne were referred to Huestis Cook. They were led to an attic which held piles and boxes of negatives and prints. From this treasure trove they put together a 1952 Virginia Museum of Fine Arts exhibition entitled Southern Exposures and, in 1954, printed 156 of the photographs in a book entitled Shadows in Silver. The Valentine Richmond History Center bought the collection from Mary Latimer Cook, Huestis' widow, in the 1950s.

As historians of the 1930s began to compare the history books of their predecessors with the world they saw around them, it became obvious that the stories of key segments of the population such as women, minorities, and the lower classes were not being told. Archives had catered to the historians, their primary clientele, by focusing on the materials that could be used to chronicle the lives of the middle and upper classes. The tragic result was that whole communities had become what has been termed "under-documented"; the historical evidence most vital to the documentation of their stories has been lost. It is that fact that makes collections like the photographs of George and Huestis Cook and efforts such as this joint project between VCU Libraries and the Valentine Richmond History Center so absolutely vital.

The Photographers
George S. Cook (1819-1902)
George S. Cook, born in Stratford, Connecticut in 1819, was studying painting in New Orleans when photography was introduced in America in 1839. He immediately espoused the new medium and, until he settled down in 1849, helped to spread photography throughout the South. First, he ran a gallery in New Orleans, then he set out to teach the tricks of the trade to others in small, inland towns. He would teach a few students in each town while establishing a studio, then sell the business to the most promising student.

Cook settled in Charleston, South Carolina, to raise a family. During the Civil War, he was one of the foremost Confederate photographers and became famous by recording the gradual deterioration of Charleston and Fort Sumter. When he moved his family to Richmond in 1880, his older son, George LaGrange Cook, took over his studio in Charleston.

In addition to his active studio, Cook bought the negatives and businesses of other Richmond photographers who were retiring or moving. In doing so, he amassed the most complete collection of photographs of the city in one studio. George Cook remained an active photographer all his life. During the 1880s his younger son, Huestis, became interested in photography and eventually went into business with his father. After George's death on November 27, 1902, Huestis took over the Richmond studio.

Kocher, A. Lawrence and Howard Dearstyne. Shadows in Silver: A Record of Virginia, 1850-1900, In Contemporary Photographs Taken by George and Huestis Cook, With Additions from the Cook Collection. New York: Scribner, 1954.

Huestis P. Cook (1868-1951)
Huestis Cook was one of the earliest Southern photographers to picture African Americans in realistic settings. Significantly, as noted in Shadows in Silver, a book published in 1954 about the Cooks, the first professional photographs that Huestis took were at an African American church picnic. These photographs foreshadowed the shape his career would take. Later he also posed African Americans in commercially popular stereotyped manners, but the evidence that he left elements of the truth behind the poses is of enduring importance.

Huestis Cook's techniques may not have made him as famous as his father, but the younger Cook's work stands out now as a historian's photographer. He recorded physical and sociological events on a much wider scale than the busiest painter ever could have. Huestis Cook has been described an exacting, straight forward commercial photographer, known now for his prolific and versatile agricultural and industrial series. He recorded the tobacco industry from the seed beds to the packaging rooms. His photographs of Virginia plantation houses and the treasures they contained were the first, and sometimes the only, taken before the houses were altered or destroyed. His father's work, which made him famous in his lifetime, was important not only for the photographs, but for the precedent he had set as a photographer and a businessman. After Huestis' death in 1951, his widow sold all of the negatives and prints that he had saved to the Valentine Richmond History Center, where the collection is now preserved.

Bibliography
Kocher, A. Lawrence and Howard Dearstyne. Shadows in Silver: A Record of Virginia, 1850-1900, In Contemporary Photographs Taken by George and Huestis Cook, with Additions from the Cook Collection. New York: Scribner, 1954.

Ordering Information
For information about ordering copies of these images, go to the Valentine Richmond History Center. Be sure to include the negative number of each photograph if it is available. 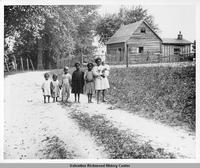 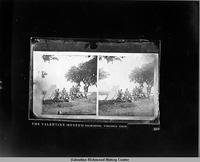 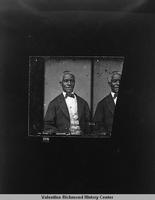 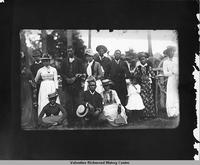 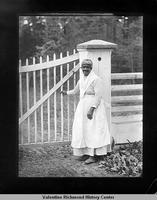 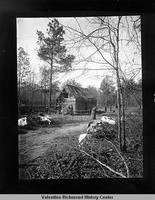 'Negro cabin built by the woman in picture' 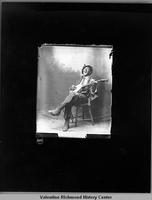 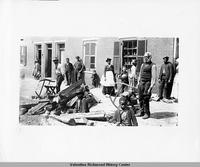