About Jackson Ward
Richmond's Jackson Ward neighborhood is located on the northern edge of the downtown district. It was originally built by European immigrants attracted to and made prosperous by Richmond's status as a central retail hub. Freed slaves began moving into the neighborhood during Reconstruction, and by 1920 Jackson Ward was one of the most active and well-known centers of African-American life in the country.

Jackson Ward hosted a thriving entertainment district centered on the famed Hippodrome theatre. Among the names that appeared regularly were Ella Fitzgerald, Duke Ellington, and Richmond's own Bill "Bojangles" Robinson. The neighborhood was the home of a number of large and well-known African-American churches, including the Sixth Mount Zion Baptist Church, founded by famous orator John Jasper. It also hosted a strong retail and business community in which Maggie L. Walker became the first woman in America to found and lead a bank in the United States when she opened the St. Luke Penny Savings. Jackson Ward was also the home and headquarters for civil rights advocate John Mitchell, Jr., editor of the Richmond Planet, which crusaded against the discrimination and persecution of African-Americans in the South.

The late 1950s would have a devastating effect on the unity of Jackson Ward. City and state officials designed the Richmond-Petersburg Turnpike (now part of I-95) to pass through Jackson Ward, bisecting the neighborhood and tearing down many structures. At the same time, desegregation and white flight were opening other neighborhoods to blacks, beginning a scattering that gradually left more and more of Jackson Ward in the possession of absentee landlords and real estate speculators. As buildings began to deteriorate, the area was further targeted for new development such as federal housing projects, the City Coliseum that opened in 1970, and the building of additional administrative buildings by the city, state, and VCU. A number of the buildings pictured here have been demolished in the thirty years since these photographs were taken.

This collection
VCU Libraries, in cooperation with the City of Richmond, is proud to present this series of photographs documenting Richmond's historic Jackson Ward neighborhood. These photos were taken by John Zehmer as part of a City of Richmond project, and published in 1978 in the book The Jackson Ward Historic District, with text by Robert P. Winthrop, Virginia architect and specialist in the architectural history of Richmond. Items in this collection were digitized in 2007.

The online collection presents the entire book as originally published, page by page. We have also digitized each of the original photographic prints used, scanned from the mock-up boards used in the preparation of the book for printing, from the collection housed at James Branch Cabell Library Special Collections and Archives. Each photograph is presented with the accompanying text from the original book, with additional information about the architectural style and features of the building depicted. Obvious errors (primarily spelling errors) have been corrected. Addresses have been supplied for the photographs on pp. 36-40. 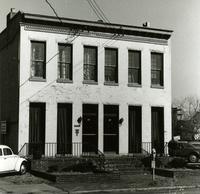