During the 1950s Prince Edward County would become the focus of the public schools desegregation issue in Virginia. On 23 April 1951, African American students at Robert Russa Moton High School walked out to protest squalid conditions at the segregated site. Four years earlier the school had been ruled inadequate by the State Board of Education.

Attorneys Spottswood Robinson and Oliver Hill of Richmond met with the student leaders and agreed to represent them in court if they agreed to challenge Virginia's public school segregation law. The students' challenge to Virginia's law eventually became one of five such complaints heard in the landmark Brown v. Board of Education Supreme Court case. In 1954, the nine Justices ruled unanimously in favor of the students, overturning the "Separate But Equal" precedent established by Plessy v. Ferguson in 1896. The decision also set in motion a course of "Massive Resistance" by segregationists and the Virginia political power structure. In Prince Edward County, rather than integrate their public schools, segregationists chose instead to close their public schools from 1959-1964.

On the ground documenting these events was Edward H. Peeples (RPI graduate '57 and Emeritus professor at VCU). By the late-1950s, Dr. Peeples had become active in the Civil Rights Movement and participated in activities seeking to reform social injustices. While earning his graduate degree at the University of Pennsylvania, his concerns for the state of race relations in Virginia prompted him to return to Prince Edward County to research his thesis, A Perspective of the Prince Edward County School Issue (1963).

The Collection
During the course of his research, Dr. Peeples photographed over 100 images of schools in Prince Edward County. In addition to taking photographs of segregated public schools that had been in use prior to 1959, he also took images of the private schools established after the public schools did not open in 1959. These photographs were taken from 1961 through 1963 and are illustrative of the lack of resources provided by the state and the county for its African American students. VCU Libraries is proud to present all of the images here, digitized from the original negatives in 2009. Also included are Dr. Peeples' original annotations.

In addition, the collection includes contemporary photographs and several of Dr. Peeples' written works in order to provide context for the early 1960s images. The contemporary photographs were taken by Dr. Peeples from 1988 until 2003. He photographed buildings, persons, and events, such as the ceremonies conferring national historic recognition on the Robert Russa Moton School in 1998 and the 50th anniversary of the Prince Edward County Student Strike in 2001. Among the text documents are a mimeographed chart dated 1965, titled "13 Known Private Schools in Virginia Established Since 1958 to Circumvent Desegregation", and two highway maps, annotated by Dr. Peeples, pinpointing the location of the Prince Edward County photographs. Using these maps and other information, we have identified and supplied GIS coordinates for most of the buildings in the 1960s photographs.

To browse by name of school or building, use the facets on the left side of the search/browse for this collection

In honor of Dr. Edward H. Peeples
With gratitude for his devotion to justice for all the people of Virginia. VCU Friends of the Library, 2007–2012.

"A lot of people are waiting for Martin Luther King or Mahatma Ghandi to come back - but they are gone. We are it. It is up to us. It is up to you." – Marian Wright Edelman 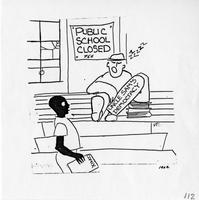