James W. Allison Papers (1891, 1893-1896), Architects’ Correspondence
This online collection of correspondence is from the papers of James W. Allison, a late 19th century wealthy Richmond businessman. The collection includes over 100 documents - letters and a few telegrams - concerning the construction in 1894-1896 of what is today VCU’s President’s House, 910 W. Franklin Street. Fully 104 of the documents are from the hands of the architects that Allison hired to design his mansion. Much of the correspondence includes replies to questions by Allison during the construction of his house. The letters also describe the selection of such elements as fireplace mantles, gas-and-electric fixtures, decorative tiles, and scenic wallpaper.

Soon after the Civil War, James W. Allison (1833-1898) established the seed and fertilizer firm of Allison & Addison with Edmund B. Addison. By the 1890s the company had expanded greatly and become one of the most successful fertilizer producers in the South. The earliest letter in the collection is from Allison to his wife, Minnie Clemens Jones Allison (1870-1927). It notes their intention to construct a new house. A year later they chose the site on W. Franklin Street, at that time Richmond’s most fashionable residential neighborhood. At the time of his death in 1898, Allison left an estate of nearly one million dollars.

In 1938, the Allison family sold the house to Richmond Professional Institute (RPI), the forerunner to VCU on the Monroe Park campus. The building was used as the residence of the head of RPI for thirty years. Since 1968, when VCU was formed, it has served as the main offices of the President of the University. James W. Allison, Jr. (1894-1979) donated the collection of his father's papers to VCU Libraries in the early 1970s. They contain original architectural drawings, correspondence, and other materials. The James W. Allison papers are a valuable resource for those interested in late 19th century architectural history. These documents are housed in Special Collections and Archives at the James Branch Cabell Library, VCU Libraries. For more about the collection, see the finding aid for the James W. Allison papers.

The Architects: Percy Griffin and T. Henry Randall
Allison chose the New York architectural firm of Griffin & Randall to design his house. Both partners boasted fine architectural pedigrees. Percy Griffin (1866-1921) graduated from the architectural school at the Massachusetts Institute of Technology in 1884 and then worked in the office of H. H. Richardson. T. Henry Randall (1862-1905) had also worked for Richardson after attending Johns Hopkins University, MIT, and the Ecole de Beaux-Arts in Paris. Randall, a native of Annapolis, Maryland, was the partner who decided on the Colonial Revival design of the house – making it one of the first of that style of houses built in Richmond. It pre-dates other early Colonial Revival houses on Monument Avenue by some 10 years.

The correspondence also details the demise of the firm. In 1895, Griffin and Randall decided to part ways in the middle of the construction of the Allison house. As the letters indicate, Allison was forced to choose which architect he wanted to oversee the completion of his house. Randall, who was the senior partner and who had the most influence over the building’s design, was selected.

For more information about the architectural history of the house, see Ray Bonis and Melissa A. Zimmerman, “The VCU President’s House, 1896-1996: From the Colonial Revival to the World Wide Web,” The Styles of Virginia Architecture: Abstracts of the Fourth Annual Virginia Architectural History Symposium, 1996 (Richmond: VCU School of the Arts, 1996).

Editorial Note
The following transcriptions of correspondence from the James W. Allison papers, were prepared during the spring 2006 semester in History 691, “Topics in Documentary Editing and Scholarly Publishing,” taught by John Kneebone, in the graduate program of the VCU Department of History.

Each document has been given a title, consisting of the names of the author and the recipient and the date of the document. The editors followed a conservative transcription policy. Words in the transcripts are spelled as they are in the original documents. Textual notes follow the procedure of italicizing editorial comments within square brackets, described by David L. Vander Meulen and G. Thomas Tanselle, “A System of Manuscript Transcription,” Studies in Bibliography, 52(1999):202-213.

A provenance note in brackets follows each document. Most of the documents are signed autograph letters (ALS) but a few are documents recording texts of telegrams. Because changes in letterheads reflect the dissolution of the architectural partnership of Percy Griffin and T. Henry Randall, texts of letterheads appear in the provenance note. It was James W. Allison’s practice to preserve the letters in their envelopes, on which a summary of the letter’s contents was docketed. The docketed notes on the envelopes are reported in the provenance note.

The following silent emendations have been made. The formal elements of the letters—address, date, salutation, and closing—have been standardized in their location on the page (at the left margin) only. Words broken or hyphenated at line ends in the documents have been restored. Ampersands and other symbols representing the word “and” in the documents have been standardized to “&.” Superscripts have been dropped to the line. To facilitate possible future online access to the transcripts along with the document images, the transcriptions mark page changes with square brackets and an italic statement of the image number online. 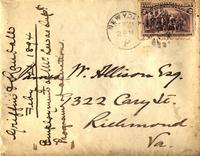 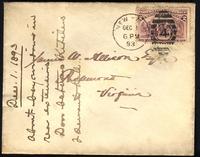 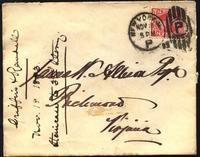 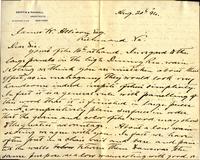 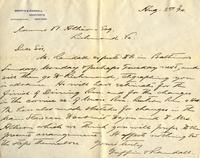 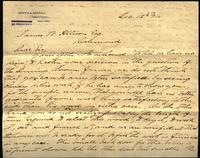 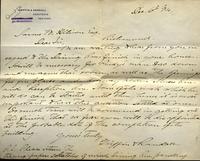