About this collection
This collection contains data sheets that identify and evaluate over 600 structures located in Richmond’s Jackson Ward and Oregon Hill neighborhoods. The surveys were compiled by the City of Richmond’s Department of Planning and Community Development in the mid-1970s. The evaluations were intended to be used in preservation plans and for city planning as a whole. These data sheets predate the standard survey forms used in Virginia used since the 1980s.

The survey form included a section identifying the building, its basic architecture, and the date of construction. A separate section was used to evaluate the structure’s architectural significance. The forms were color-coded: yellow for Jackson Ward, green for Oregon Hill. Many of them also included one or more photographs of the buildings that were evaluated. In presenting these, we show the original data sheet with the photograph attached, as well as separate images of the photographs themselves. Occasionally, there were also separate Assessors Property Cards included, with further details on the buildings, presented here as separate images. 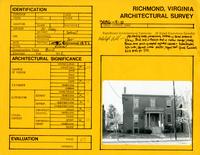 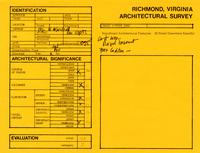 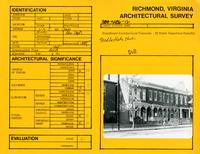 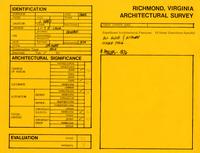 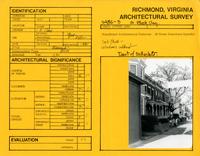