About this collection
The Richmond Illustrated Imprints Collection contains digital versions of late 19th and early 20th century books that illustrate Richmond. Some of these books were published in Richmond. This digital collection will grow as other books and publications of the city are added. All digitized books are fully searchable. The books themselves are housed in James Branch Cabell Library Special Collections and Archives.

The first three publications to be featured in the Richmond Illustrated Imprints Collection were published in the 1890s. This decade was a time of transition for Richmond as it emerged from the Reconstruction Era to a time dominated by the New South vision of industry and veneration of the Lost Cause. City manufacturing of tobacco, specifically the production of cigarettes, spiked in the 1890s. This spurred economic growth. At the same time, monuments and statues to the leaders of the Confederacy were erected. Monument Avenue, a grand avenue of domestic architecture and Confederate monuments, which came into being in the 1890s, is a reflection of both of these forces.

New Album of Richmond Views (1890s), Richmond, Virginia, Illustrated (1891), and Art Work of Richmond (1897) were part of a wave of books published nationally at this time that are often called city-booster books. They were meant to sell an idealized view of a city. These Richmond publications virtually ignore the life of the city’s lower classes and that of its African American population. The publishers of these books wanted to illustrate the city’s economic and cultural growth.

Altogether, these books contain nearly 200 images of the city. They show a variety of Richmond structures including domestic, civic, religious, and commercial architecture. Views range from city parks and cemeteries to street scenes of horse and buggies and early streetcars. Some of the views are rare. Others were often reprinted. 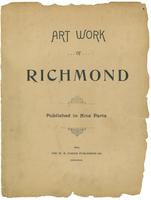 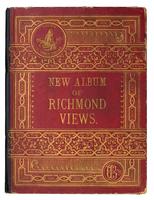