About this collection
The Richmond Nineteenth-Century Print Collection includes 146 images of buildings, streetscapes, events, and scenes of daily life of Richmond, Virginia. This set of images is part of James Branch Cabell Library's "Richmond and Virginia Print and Map Collection," housed in Special Collections and Archives.

Because of its status as the capital of the Confederacy, Richmond was often the focus of interest by American and British journals during and after the Civil War. The digital images presented here date from 1853 to 1901 and were scanned from six different periodicals that are part of the larger print and map collection.

More than half of the images presented are from Harper's Weekly, one of the most popular journals in the nation, whose work is often referred to as illustrated journalism. During the Civil War, artist A. W. Warren, a national correspondent based in New York, drew many of the images of Richmond published in Harper's Weekly. After the war, William Ludwell Sheppard (1839-1912), a native and resident of Richmond, provided sketches of the city for the magazine from the late 1860s through the early 1880s. Sheppard was a noted painter who also designed three Civil War monuments that were erected in Richmond - the General A. P. Hill Monument in the city's north side, the soldier on top the Confederate Soldier's and Sailor's Monument in Libby Hill Park, and the Howitzer Monument, which stands now on the Monroe Park campus of Virginia Commonwealth University.

Researchers and library patrons can access the larger "Richmond and Virginia Print and Map Collection" in James Branch Cabell Library's Special Collections and Archives. The department also houses the multi-volume bound reprint edition, 1860-1865, of Frank Leslie's Illustrated Newspaper. VCU Libraries also subscribes to the online version of Harper's Weekly covering the years 1857 through 1877, HarpWeek: The Civil War Era and Reconstruction I and II.

Alabama regiment marching through Capitol Square, Richmond, on their way to join the Rebel forces under Beauregard

Army of the Potomac -- General Davidson's Brigade taking possession of Mechanicsville, near Richmond, Virginia, May 24, 1862 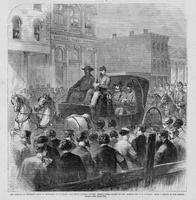 Arrival of Jefferson Davis in Richmond, on Saturday, May 11th; passing up Main Street under escort of Gen. Burton and U. S. Cavalry

Arrival of Jefferson Davis on board the steamer John Sylvester, at Rockett's-Landing, James River, Va., Saturday, May 11th

Assembling for the meet; A scene on the lawn in front of the Deep Run Hunt Club, Richmond, Virginia

Before Petersburg -- Rebel fort and line of works near Burgess Mills, captured by the Sixth Corps, April 2, 1865

Before Petersburg -- The retreat of the Rebels across the Appomattox, by the Pocahontas Bridge, April 3, 1865 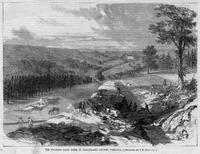 Birds eye view of Richmond and the vicinity 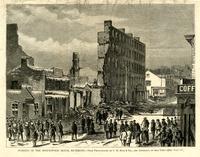 Burning of the Spottswood House, Richmond